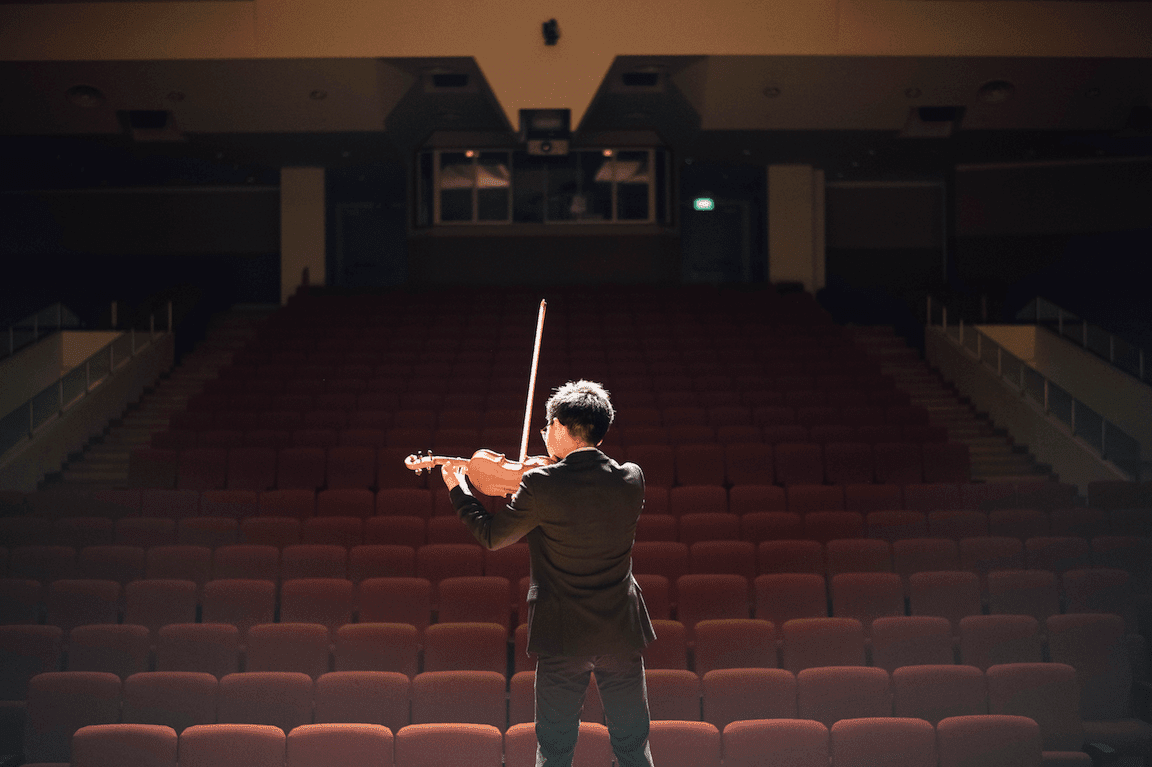 Stage fright is one of the most common human conditions, even amongst performers, company leaders, and presenters who regularly find themselves in front of an audience. In fact, 98% of musicians have reported experiencing some form of performance anxiety. Sweaty palms, rapid heartbeat, dizziness, nausea, and even more serious symptoms including panic attacks are just a few of the side effects that can result from performance stress.

In order to minimize their symptoms, as well as find a way to gain stage confidence, performers turn to a variety of techniques and treatments including yoga, mindfulness training, biofeedback, and more. And increasingly, a growing number are turning to beta-blockers.

A medication most commonly used to treat heart and blood pressure conditions, beta-blockers can also be used to hinder the physical symptoms of stress by stopping the release of adrenaline in a high-pressure situation. When given in a small dose, and combined with other anxiety treatments such as exposure therapy and beta-blockers can be a safe and effective treatment for those looking to get past their stage fright.

We spoke with Dr. Robert Attaran, an assistant professor of cardiology at Yale University, to learn more about the use of beta-blockers as a treatment for performance anxiety.

I have had patients with such severe performance anxiety that they can feel completely paralyzed. Some become tearful, one or two even feel very sexually aroused!

A common feeling is one of unpreparedness. Some performers at the last minute become obsessive-compulsive and check their instrument, wallet, or zipper several times. One performer I met tried to go to the bathroom at least half a dozen times before going on, just in case there was anything left in the bladder.

Is the use of beta-blockers to treat performance anxiety well-known within the medical community?

Yes, the use of beta-blockers to treat some of the manifestations of performance anxiety (tremors, sweaty hands, etc.) has been known for decades.

Is the use of beta-blockers to treat performance anxiety accepted within the medical community? Is it controversial?

It is largely accepted, as long as the drugs are used with appropriate caution. Extra caution should be used, for example, amongst asthmatics and in people with low blood pressure.

In your professional opinion, do you support the use of beta-blockers to treat performance anxiety?

I think it is an individual decision. I certainly do not support the use of mind-altering drugs, sedatives, benzodiazepines, and narcotics. But beta-blockers are much more benign. They will not eliminate the feeling of anxiety and fear, but they will reduce some of its symptoms. This can prevent a negative feedback loop in some performers, who will feel even more nervous if they notice they have a tremor, for example.

Please explain why beta-blockers can be effective for treating performance anxiety. What are the benefits compared to other common treatments?

Beta-blockers block the effects of adrenaline in various parts of the body. This can reduce sweaty palms and a tremor.

There seems to be a stigma around using beta-blockers to treat performance anxiety. In your professional opinion, is that stigma warranted?

There may be a slight stigma, but it is far more acceptable than say an athlete taking anabolic steroids. Beta-blockers won’t make you a better performer, per se. They will, however, slightly curb the physical manifestations of performance anxiety, allowing you to deliver a more unhindered performance.

Can beta blockers enhance a person’s performance during a speech, performance, meeting, etc.?

This ties in with what I said above. They are unlikely to enhance your performance unless the symptoms of anxiety are disabling. There is also, no doubt, a placebo effect. They can also act as a crutch.

In your professional opinion, do you consider a professional who uses beta blockers for giving speeches, performing music, etc. to be taking a shortcut?

Beta-blockers can be used as a tool. Just as training, preparation, visualization, good diet and exercise are tools to create the conditions for a good performance, beta-blockers are also a tool. However, they should not be a substitute for the other tools mentioned here.

Some performers considering beta-blockers think they will inhibit their anxiety. They won’t. They will only dampen the physiological response to anxiety.

What would you recommend to someone who’s considering taking beta-blockers for performance anxiety?

Everyone considering beta-blockers for performance anxiety should see a doctor about it, preferably one with experience in their use. Beta-blockers are not for everyone, especially not for certain people with pulmonary conditions, slow heart rates, and low blood pressure, to name a few.

They can have lots of side effects. The user can feel as if she or he is in a fog. This is not ideal for a performer. They can also cause fatigue, erectile dysfunction and interfere with melatonin leading to sleep disruption.

Also, very importantly, beta-blockers are not all the same. They carry different potency and tolerance profiles. Propranolol is an older beta-blocker. Some individuals feel milder side effects with newer beta-blockers like nebivolol or bisoprolol, but everyone is different. I strongly recommend starting with a low dose and rehearsing the planned performance.

Why do beta-blockers cause some people to feel fatigued?

Fatigue is a common complaint with beta-blockers. This might be due to its blockage of the effect of adrenaline in the body. While on that topic, it must be said that some adrenaline can be very useful. The Yerkes-Dodson law in psychology shows that there is a bell-shaped relationship between arousal and performance. Too little or too much arousal can be a bad thing!

You mention in the documentary Composed that it’s reasonable to be cautious with propranolol. Can you please expand on this point?

Performers with a heart condition should be wary of beta-blockers. Many people who have suffered a heart attack or have a weakened heart pump are prescribed beta-blockers long-term by their cardiologist. Such patients should stay on it, on a regular basis. Also, beta-blockers should not be taken in combination with certain stimulants, such as cocaine, as potentially life-threatening interactions are possible.

Also, as beta-blockers can block the effects of adrenaline, they can mask the natural stress response, for example amongst diabetics, should they develop hypoglycemia or other metabolic crises.

Composed points out that some people get propranolol from friends and family members rather than going to a doctor. What’s the biggest concern here?

It’s always good to see a physician first so they can ensure safety and appropriateness. Also, by not purchasing the beta-blocker from a reputable pharmacy, you will not know what kind and how much dosage-wise you are getting, which can be extremely dangerous.

I should mention that I don’t work for any drug company, nor do I get paid by any of them. I’m not going to tell you which beta-blocker you should take, but I recommend working with your physician in finding the right fit!

To hear more from Dr. Attaran and learn more information about the use of beta-blockers in the classical music community, check out the 2017 documentary Composed here.